It is with great sadness that we announce the death of our beloved friend and colleague, Michael Donoghue, who died on Tuesday following a major stroke. He was 73. Mike was tremendously influential in a wealth of actions regarding protection of the marine environment, and the conservation of marine mammals in New Zealand, the South Pacific and elsewhere. Put simply, he was a champion for a better world.Born in 1949, Mike Donoghue worked for years as a self-employed fisherman in the Hauraki Gulf. After earning a Masters of Science in Oceanography from Southampton University, he joined the New Zealand Department of Conservation in 1987, where he was responsible for the development of the government’s marine mammal policy. His many duties involved the management of whale strandings, as well as bycatch mitigation efforts for marine mammals, notably the endangered Maui and Hector’s dolphins. Mike also led successful efforts to establish marine mammal sanctuaries in the waters of the Banks Peninsula and the sub-Antarctic Auckland Islands.Mike’s influence was apparent everywhere in the waters of Oceania. He worked closely with the Secretariat of the Pacific Regional Environment Programme (SPREP) to develop their Marine Species Action Plans, an effort which brought together representatives from 21 Pacific Island states and territories covering over 30 million square km of ocean. Later, Mike joined the organization to take on the role of Threatened and Migratory Species Advisor.For several decades, Mike provided scientific advice to three New Zealand Commissioners to the International Whaling Commission (IWC), during which time he attended 22 Annual Meetings of the IWC; for several years, he led the NZ delegation to the IWC’s Scientific Committee. He was effective at promoting New Zealand’s strong anti-whaling policy while attempting to improve governance of the Convention, and maintain a dialogue with the pro-whaling nations. He will be remembered there as a tenacious advocate for living whales who was respected and liked by all, even those with whom he often battled.Beyond the impressive resumé outlined in the briefest of detail above, we will remember him most fondly as one of the founding members of the South Pacific Whale Research Consortium. The Consortium unites whale researchers across the entire South Pacific, from Australia and New Zealand, across the many island nations of Oceania, and to western South America. The Consortium has been directly or indirectly responsible for the establishment of numerous whale sanctuaries in the region, and Mike’s role in those many individual and collective efforts cannot be overstated. His knowledge of the region, his keen sense of political strategy, and his ability to charm and persuade people from a broad range of constituencies, were key to the Consortium’s work. We’ve often mused among ourselves that the core of our Consortium has always been a second family to us all, and Mike’s warmth and perpetual optimism contributed much to that atmosphere.And beyond all that, Mike was a delight to be around, with a frequent smile and an easy laugh that came from a sometimes deliciously wicked sense of humor. His kindness was boundless, and many people in the field today were helped in their careers by his advice and sheer generosity of spirit.As a conservationist, Mike Donoghue was a tireless and effective advocate for the ocean, and the species which depend upon it. As a person and a friend, he was irreplaceable.Farewell, old chum.Phil Clapham, Olive Andrews, Scott Baker, Simon Childerhouse, Rochelle Constantine, Ellen Garland, Claire Garrigue, Nan Hauser, Yulia Ivashchenko, Mike Noad, Dave Paton, Michael Poole, Debbie Steel and Juney Ward (South Pacific Whale Research Consortium, Auckland, New Zealand)Mike Donoghue always wore a lot of hats. He was a founding member of the International Committee on Marine Mammal Protected Areas which started meeting in 2007. He was great fun and so helpful at all of our meetings and conferences. He helped us as a member of the Task Force on Marine Mammal Protected Areas and hosted us in early 2017 for the first GOBI Workshop to identify Important Marine Mammal Areas, in Samoa, through his role with SPREP. He welcomed us formally, always giving more credit to his colleagues and then turned over a conference room at SPREP to us for the whole week, participating in the discussions leading to candidate IMMAs. We joined him the following week in Tonga, one of his special spots, for the SPREP Whales in a Changing Ocean conference and celebration. This photograph was taken that week as the conference was proving to be a big success. He was glowing, the smile even wider than usual.Erich Hoyt, Giuseppe Notarbartolo di Sciara, Gill Braulik, Gianna Minton, Simone Panigada, Margherita Zanardelli, Michael J. Tetley, Caterina Lanfredi, Elena Politi from the IMMA Secretariat and all the members of the International Committee on Marine Mammal Protected Areas and the IUCN SSC-WCPA Marine Mammal Protected Areas Task Force 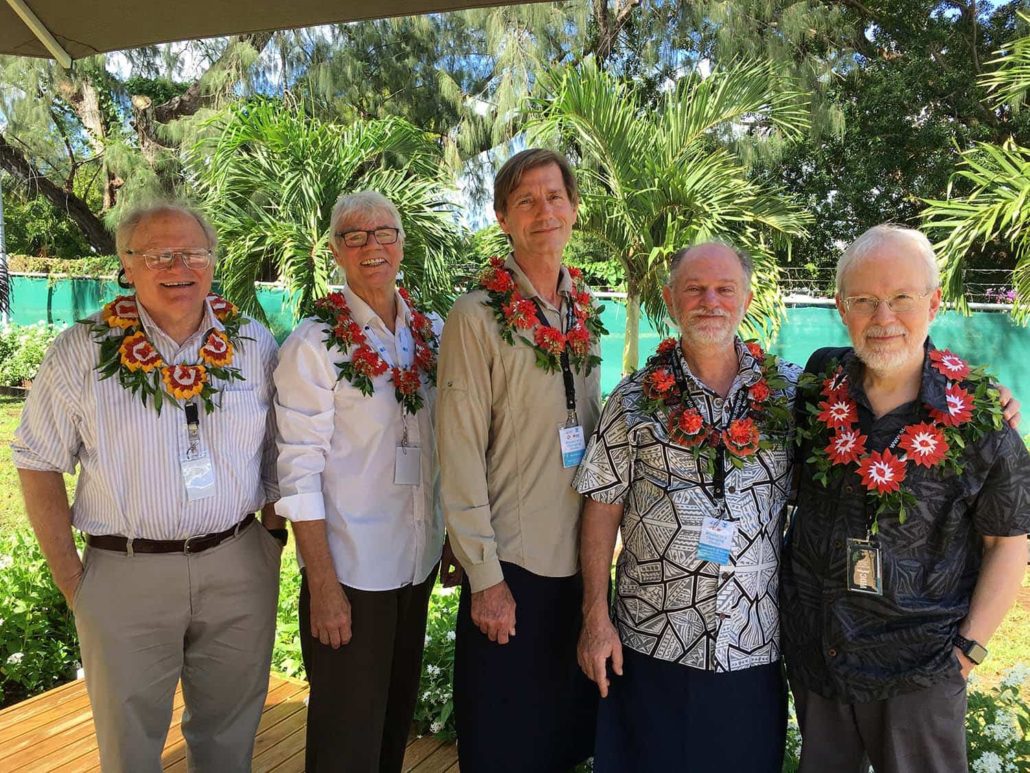 Mike Donoghue with friends and members of the Task Force in happier times in Tonga at the conclusion of the Whales in a Changing Ocean conference which he helped organize with the nations of the Pacific Islands.