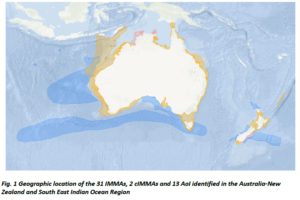 The Australia-New Zealand and South East Indian Ocean Workshop, the sixth IMMA Regional Workshop, was held in Perth, Western Australia, between 10 and 14th February 2020.   The Workshop was supported by the Global Ocean Biodiversity Initiative (GOBI), within the International Climate Initiative (IKI) of the Government of Germany and a contribution from Whale and Dolphin Conservation.  The report of the IMMA Regional Workshop for Australia-New Zealand and South East Indian Ocean can be dowloaded from here,  and the Executive Summary from the Workshop is presented below.  The main results are also succinctly described in the News Section of this website.

From 10 to 14 February 2020, the IMMA Regional Workshop for Australia-New Zealand and South East Indian Ocean was held in Perth, Australia, with the goal to identify and delineate Important Marine Mammal Areas — IMMAs. These discrete portions of habitat, important for marine mammal species, aim to have the potential to be delineated and managed for conservation. Starting with 438 Areas of Interest (AoI), more than 50 which were submitted before and during the meeting by participants, and the others comprised of existing marine mammal spatial designations, some 45 candidate IMMAs (cIMMAs) were identified and proposed through an expert-based process, utilizing dedicated selection criteria. These criteria were devised by the IUCN Marine Mammal Protected Areas Task Force (the “Task Force”) in consultation with the marine mammal science and wider conservation and stakeholder community.

The workshop was attended by 31 experts and observers from seven countries or overseas territories, including Australia, Indonesia, Italy, New Zealand, Turks and Caicos Islands, United Kingdom and United States of America. The observers came from the Australian federal and state governments and the IMMA Review Panel.  The five members of the IMMA Secretariat were from Italy and the UK. In a number of cases, the expert held a main residence in a country other than where the research was done, and a number of experts had worked in multiple areas in the region.

The Australia-New Zealand and South East Indian Ocean Region is an area of rich biodiversity. The 50 participant expert AoI submissions were the core of the work to go forward, but the IMMA Secretariat collected, in addition, Biologically Important Areas (BIAs) identified by the Australian government, Ecologically or Biologically Significant Areas (EBSAs) identified through the Convention on Biological Diversity (CBD) process, and other existing areas with known marine mammal habitat consisting of MPAs from the World Database on Protected Areas and the Cetacean Habitat database. The total participant and reference AoI added up to 438 AoI. On the first two days of the workshop the draft total of 50 participant AoI was expanded by several additional expert submissions which went straight to cIMMA proposals. From these, during the workshop, the group merged some areas and deferred others, and then prepared cIMMA submissions, proposing boundaries and detailing how each one met the various IMMA criteria.

The experts identified cIMMAs for the first time for Endangered Hector’s and Critically Endangered Maui dolphins and Vulnerable Australian humpback and Australian snubfin dolphins, only recently recognized as species; as well as nearshore habitat for most of the world’s remaining dugong; and deep canyons with Vulnerable sperm, and Endangered blue and pygmy blue whales. Also living in Australia and covered by the cIMMA proposals are two species of bottlenose dolphins and the Endangered Australian sea lion. The full list of marine mammal species included in the region’s IMMAs, together with the boundaries of accepted IMMAs, as well as other cIMMAs and AoI, are now available as part of the IMMA e-Atlas.  Still, it was recognized that there are substantial data gaps for marine mammals across many species groups in the region — partly due to the challenges from logistical issues, as well as lack of funding for larger scale surveys and other research, particularly in the High Seas.

On the last day, a regional Task Force group and coordinating committee were set up to further the work of the Australia-New Zealand and South East Indian Ocean IMMA workshop. The volunteer coordinators are Chandra Salgado Kent for Australia and Simon Childerhouse for New Zealand; Childerhouse was not present at the workshop but was proposed by colleagues and he later accepted.

Following the workshop, the next step was to assess and then send the compiled 45 cIMMAs to the independent review panel to determine whether the criteria were applied correctly and to verify that the evidence provided was sufficient to support the case for each cIMMA. However, it was determined post-workshop, in the preparation for the review, that four of the cIMMAs were not considered to have adequate information for review and thus they were recommended for AoI status. This left the 41 cIMMA submissions, and a total of five AoI, with the 4 downlisted cIMMAs added to the 1 AoI selected by participants, to go forward. Following peer review, the boundaries and a summary of the supporting evidence have now been made available on the IMMA e-Atlas, and included in the online IMMA database, with the option offered to request IMMA layers as shapefiles for implementation initiatives. Another result of the workshop was the  announcement by Charlotte Boyd that 25 of the cIMMAs were likely to fulfil the criteria including thresholds for KBAs. This dramatically increases the number of KBAs worldwide which feature marine mammals. Considering her focused work on KBAs globally, and her participation at previous IMMA workshops, Boyd concluded that the most productive way to ensure that IMMAs enable the identification of potential KBAs and that KBA thresholds inform IMMAs is if they are selected together – a process currently facilitated by the IMMA Expert Workshop process.

The decisions of the Review Panel were finalized in July 2020. In total, 31 IMMAs were accepted for full status, some of them after receipt of revisions or additional information that was required before their confirmation as IMMAs meeting the criteria. Of the remaining 11 candidate IMMAs, 2 areas were considered to show strong evidence of merit as future IMMAs so they will remain cIMMAs until they are able to fully satisfy the criteria. Another 9 areas which had been proposed as cIMMAs were determined to have insufficient evidence at this time to be considered as either IMMAs or interim cIMMAs, and thus have become AoI, joining the list of the other 5 AoI from the workshop (3 of which had been proposed also as cIMMA but had insufficient evidence and 1 of which was formally submitted as an AoI). This makes a total of 13 AoI that have now been entered into the e-Atlas. These AoI will help to build an evidence base for  additional IMMAs and, if given further monitoring and survey effort, they may be reassessed as cIMMAs in a future IMMA expert identification workshop.

A total of 31 new IMMAs, 2 cIMMAs and 13 areas gaining AoI status were approved.

The complete list of 31 areas awarded IMMA status and the two areas with approved cIMMA status can be viewed on the searchable IMMA database and the e-Atlas.