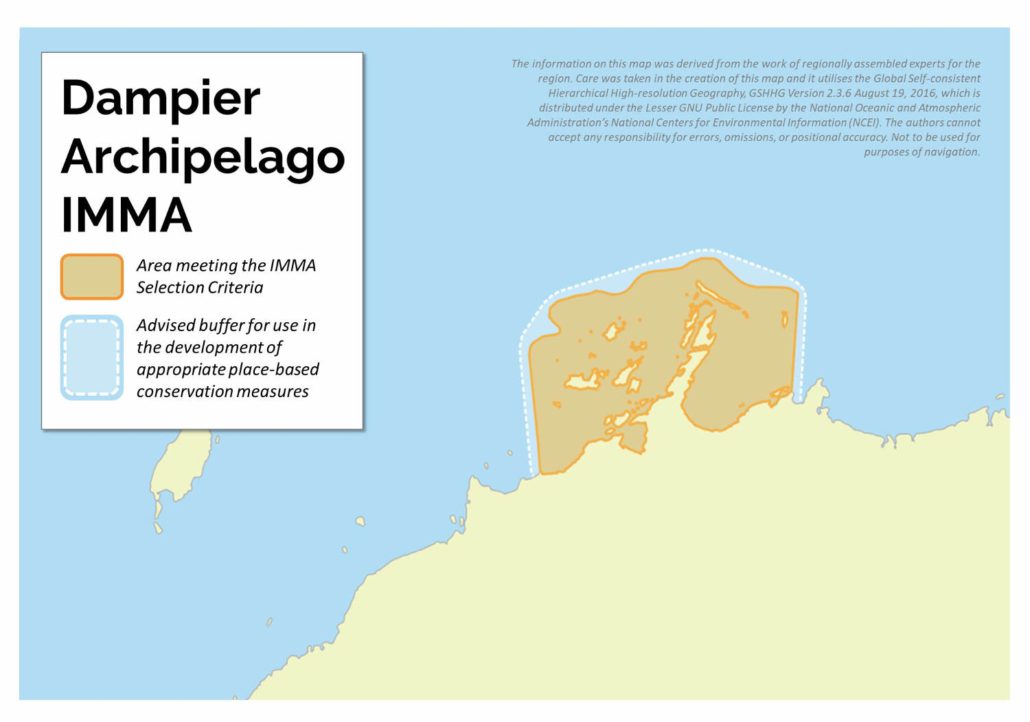 This IMMA includes the Dampier Archipelago, a collection of small islands and coastal waters along the Pilbara coast in Western Australia. The marine and coastal environment of the Dampier Archipelago/Cape Preston region comprises a unique combination of offshore islands, intertidal and subtidal reefs, mangroves, macroalgal communities and coral reefs. The area incorporates the sea country of the Murujuga people. The Vulnerable dugong (Dugong dugon) and Australian humpback dolphin (Sousa sahulensis) and the Near Threatened Indo-Pacific bottlenose dolphin (Tursiops aduncus) are all known to reside in the IMMA. The Dampier Archipelago is also on the migration route for humpback whales and includes several protected bays that are used as resting or staging areas on the southern migration. Dugongs are resident in coastal waters of the Pilbara coast and are sighted year-round, having a strong association with seagrass habitat. This species was traditionally harvested for customary purposes by the Murujuga people and is revered as totems by some.  In the Dampier Archipelago/Cape Preston region, small numbers of dugongs have been sighted in the shallow, warm waters in bays and between islands, including at East Lewis Island, Cape Preston, Regnard Bay, Nickol Bay and west of Keast Island. Current knowledge on the size of the population, distribution, migratory habits and regional and local importance of the Dampier Archipelago/Cape Preston area for dugongs is limited.

The annual migration path of the humpback whale (Megaptera novaeangliae) passes through the Dampier Archipelago/Cape Preston region. Humpback whales migrate north to the warm tropical waters off the Pilbara and Kimberley coasts in June and July to give birth and suckle their young. Females occasionally give birth in the waters of the Dampier Archipelago, although the main calving area is further north. Adult humpback whales and their young also frequent the Archipelago on their southern migrations in early spring, and Mermaid Sound and Nickol Bay are recognised resting areas for females with their calves (Jenner et al., 2001, Cummins, 2010). Non-migratory whale species recorded from the IMMA include Bryde’s (Balaenoptera edeni) and Minke (Balaenoptera acutorostrata) whales.  Additional dolphin species recorded include false killer whale (Pseudorca crassidens), Australian snubfin dolphin (Orcaella heinsohni), and killer whale (Orcinus orca). Resident populations of bottlenose and humpback dolphins have been documented in the area from recent systematic survey effort (Department of Biodiversity Conservation and Attractions, 2018). Male humpback dolphins in the area exhibit a behavioural activity whereby they present marine sponges associated with visual and acoustic posturing to mature female humpback dolphins (Allen et al., 2017). It is believed to be a sexual display by male suitors to female humpback dolphins (Allen et al., 2017).

The dugong (Dugong dugon) and Australian humpback dolphin (Sousa sahulensis) are both listed as Vulnerable on the IUCN Red List of threatened species. In addition, though not as threatened globally, the Near Threatened Indo-Pacific bottlenose dolphin (Tursiops aduncus) are all known to reside in the IMMA as well.

Small resident pops of Indo-pacific bottlenose and Australian humpback dolphins and dugongs have all been recorded for the IMMA. Research by the Western Australian state government has been underway since 2015 investigating the population of coastal dolphins that inhabit this area using aerial surveys across the Pilbara region and more focussed boat-based surveys in Dampier Archipelago.  Three aerial surveys were conducted between 2015 and 2017 and 5 vessel-based surveys between 2014 and 2019 (Waples and Raudino, 2019).  Both species of dolphins have been recorded during each survey, with some individuals re-sighted over five years, indicating there may be a degree of site fidelity to the area.  Foraging behaviour and the presence of calves have been observed indicating the area contains both foraging and breeding habitat. Results from these surveys are being analysed and abundance estimates will be published soon. As an example, boat-based surveys conducted in May 2019 encountered 25 groups of dolphins during the 7 days of field work, including 76 Indo-Pacific bottlenose dolphins and 36 Australian humpback dolphins. Many of the dolphin groups also contained young calves.

The IMMA is on the migration route for the breeding stock D humpback whale population.  Dampier Archipelago in particular is recognised as a resting/staging area for adult females and calves during the southern migration (Jenner et al 2001).  Female humpback whales occasionally give birth in the waters of the Dampier Archipelago, although the main calving area is further north. Adult humpback whales and their young also aggregate in the Archipelago on their southern migrations in early spring, and Mermaid Sound is a significant staging/resting area (Jenner et al 2001) and Nickol Bay is emerging as an important resting area with numbers ranging from a maximum of 188 sightings in August to a minimum of 15 sightings in November 2009  (Cummins 2010).

Vessel based surveys have been conducted across the Dampier Archipelago IMMA since 2015 and have recorded the presence of humpback dolphin calves, including neonates. Humpback whale mothers and calves are reported to rest in the area on their southbound migration (Jenner et al 2001; Cummins 2010).

Dugongs have been recorded in the IMMA, though little is known of their abundance, density or distribution to date. Dugongs are thought to be resident in coastal waters of the Pilbara coast and are sighted year-round, having a strong association with seagrass habitat. There is a current study underway (C. Cleguer pers comm) that is investigating fine scale links between dugong distribution and seagrass habitat and these data are currently being analysed.  Aerial surveys have confirmed the presence of dugongs in the IMMA, with herds in the shallow waters of Dampier, Cape Preston and Regnard islands (Waples and Raudino 2019).

Humpback dolphin males display a multi-modal sexual behaviour whereby they present marine sponges to mature female humpback dolphins (Allen et al., 2017). This behaviour has only been observed in northern Australia at a few key sites, other than Dampier, including Coral Bay, North West Cape, Cygnet Bay, Cone Bay (Allen et al., 2017) and in Queensland (Parra, 2007). The use of sponges in this context is very different to the use of sponges for foraging in Shark Bay by Indo-Pacific bottlenose dolphins. Indeed, the only other marine mammal known to carry objects (plant matter, stones and clay) in the context of socio-sexual display is Amazon river dolphins (Inia geoffrensis) (Martin et al., 2008).

To make a request to download the GIS Layer (shapefile) for the Dampier Archipelago IMMA please complete the following Contact Form: