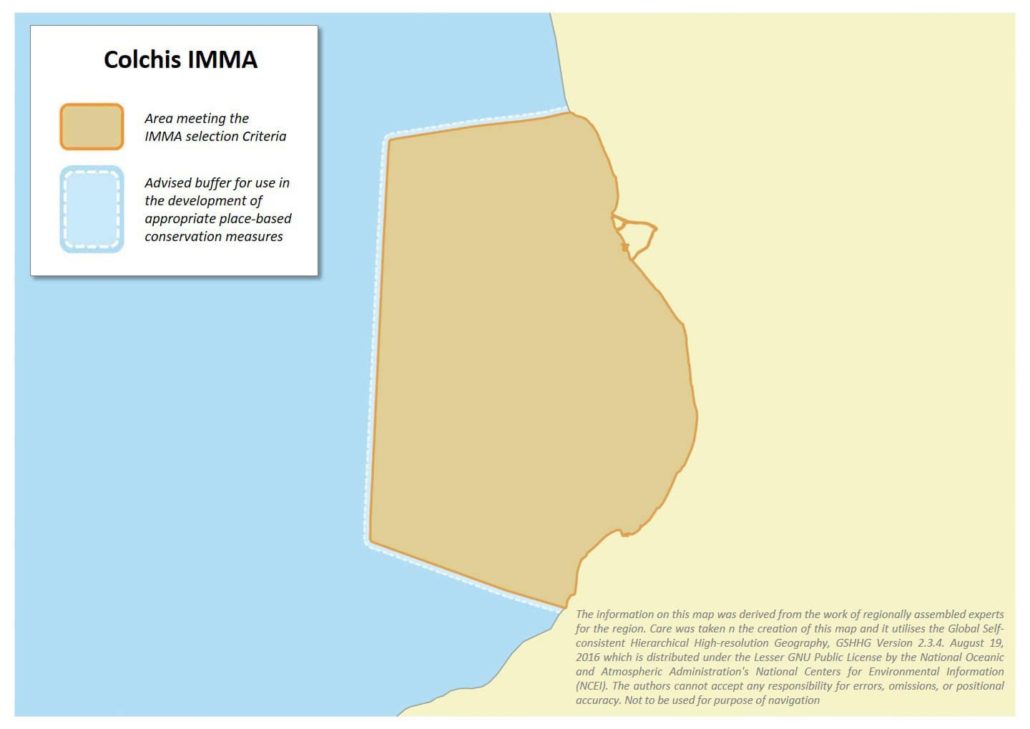 Colchis IMMA is located in Georgian territorial waters and covers the waters between the Anaklia Cape and and Sarpi (4630 km2). It includes the following habitats: open sea and circulation zone; estuaries; coastal lagoons, shallow waters and bays. The marine area is heavily influenced by the 150 rivers (including minor rivers) that discharge into the sea, and that is why the area is an important wintering ground for harbour porpoises and common dolphins; thousands of them use the marine area in winter and spring. Hundreds of common dolphins and harbour porpoises use the area in summer. Colchis is also important for feeding and breeding for all three Black Sea cetacean species. The mouths of rivers Enguri, Rioni, Khobistskhali, Supsa and Chorokhi are the main feeding grounds.

Sub-criterion C1: Reproductive Areas Evidence that the area is important for cetacean reproduction include: a) observations of courtship behaviour of Tursiops truncatus and Delphinus delphis in May and June (Kopaliani et al., 2015); b) recordings of the all three species with calves under 3 months of age; it is therefore assumed that the area is used for mating and early stages of calf rearing; and c) the finding of stranded harbour porpoises in the late stages of gestation (Kopaliani et al., 2017).

Sub-criterion C2: Feeding Areas In winter and spring, large aggregations of anchovies (Engraulis encrasicolus) use the IMMA as a wintering and spawning area (Chashchin, 1996) and provide harbour porpoises, common dolphins and bottlenose dolphins with abundant food (Birkun, 2008).  The mouths of the  Enguri, Rioni, Khobistskhali, Supsa and Chorokhi rivers are the main feeding grounds for all three species (Kopaliani et al., 2017).

To make a request to download the GIS Layer (shapefile) for the Colchis IMMA please complete the following Contact Form:

Balaklava and the southern Crimea IMMA