8 September 2020. The IUCN Marine Mammal Protected Areas Task Force announce this month the publication of a scientific paper as well as the production of a comprehensive brochure detailing their work to introduce the new tool of Important Marine Mammal Areas (IMMAs) in service of global biodiversity conservation. Since 2016, 159 IMMAs have been identified over more than a third of the ocean.

The creation of IMMAs has helped shape and lead to marine protected areas (MPAs) in Vietnam and Bangladesh, e.g., contributing to the declaration in June 2019 of the Nijhum Dwip MPA & National Park. In Mozambique, the South African SASOL company relinquished two oil & gas blocks in key dugong habitat following its identification as the Bazaruto Archipelago to Inhambane Bay IMMA, home to the last viable African dugong population.

IMMAs are also used as a layer helping to identify ecologically or biologically significant areas (EBSAs) as part of the Convention on Biological Diversity, and key biodiversity areas (KBAs) for IUCN. The Convention on Migratory Species has endorsed the IMMA process requesting States to support the initiative. The International Whaling Commission (IWC) is looking at IMMAs to help identify areas where large whales are susceptible to shipstrike.

Up to early 2020, the Task Force had received 78 requests for IMMA shapefiles and metadata, indicative of potential conservation action.

The Task Force is planning its next work in the South East Tropical and Temperate Pacific Ocean with a workshop to be held in 2021. From there it hopes to move to other northern hemisphere locations.

The new scientific paper, “Healing the Wounds of Marine Mammals by Protecting Their Habitat”, published in the journal Ethics in Science and Environmental Politics, highlights the value of IMMAs and the role of scientists and other stakeholders in putting IMMAs to work for marine mammal and wider biodiversity conservation. The brochure provides a hands-on guide to understanding and making use of IMMAs aimed at all stakeholders and the general public.

You can download copies of the paper here and the brochure here from the Task Force website where you can also visit the IMMA e-Atlas. 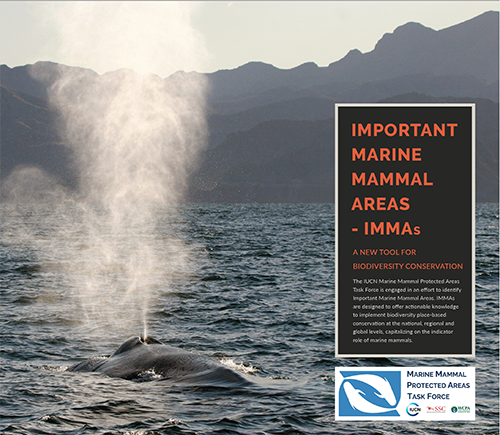 13 Important Marine Mammal Areas approved in the Southern Ocean: one of the...