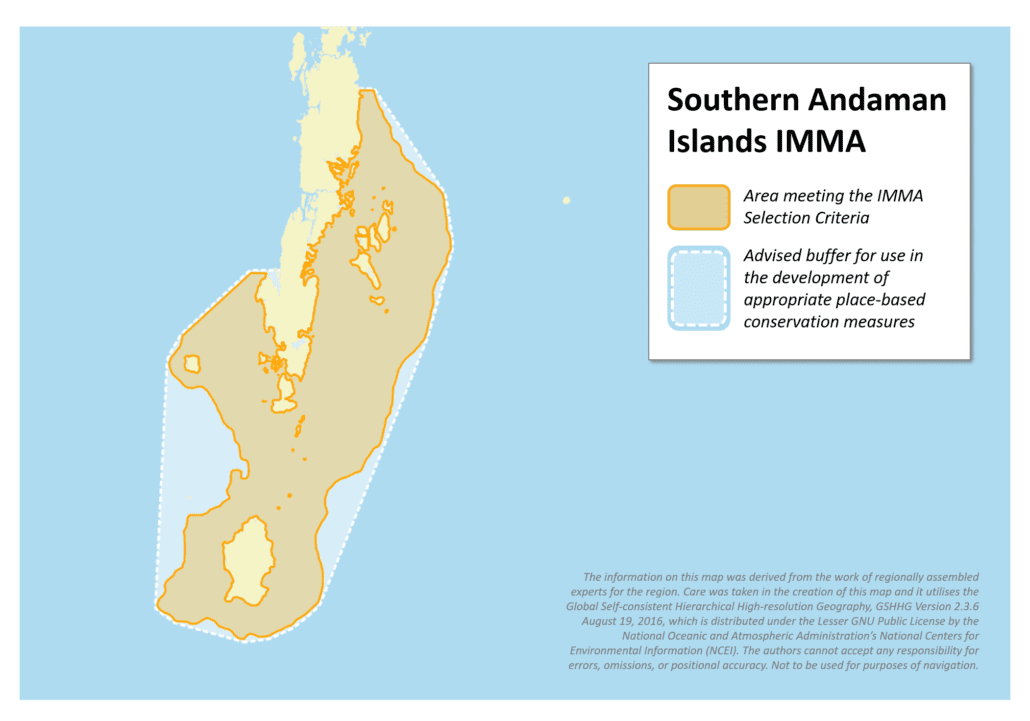 The Andaman and Nicobar Islands are a group of volcanic island systems in the North-eastern Indian Ocean with complex bathymetry, characterized by fringing coral reefs, seagrass beds and mangroves. The IMMA of the Southern Andaman Islands has 16 species of marine mammal present consisting of 15 cetacean species and the sirenian dugong. Seagrass bed dugong feeding trail surveys show that four seagrass meadows are being utilised by the remnant population of dugongs. Of the fifteen species of cetaceans recorded during systematic vessel based surveys, ferry-based sighting surveys and opportunistic sightings by network members only Tursiops aduncus and Dugong dugon are nearshore residents. They have been reported with calves, along with individual re-sightings in the IMMA. Stenella longirostris, Stenella attenuata, Grampus griseus, and Globicephala macrorhynchus are other commonly observed species in the area, while Lagenodelphis hosei, Balaenoptera omurai and Pseudorca crassidens have been reported here for the first time.

The area is known habitat for a very small and vulnerable locally occurring population of dugongs (D’Souza et al. 2013; 2015). Stranded dugong calves and adults have also been recorded occasionally. Based on interview surveys with local fishermen, seagrass beds in this IMMA have been identified as ‘Critical Dugong Habitat of the Andamans’ (Sivakumar and Nair, 2013; D’Souza et al. 2013). Furthermore, dugong occupancy across this archipelago is estimated to have declined by 60% over the last 20 years and the present distribution is largely restricted to sheltered bays and channels supporting seagrass meadows dominated by Halophila and Halodule spp. (D’Souza et al. 2013).

A total of 906 interviews were carried out in the Andaman and Nicobar islands (Sivakumar and Nair, 2013), of which 44% of respondents had sighted dugongs, with a total of 247 encounters reported. Of these 24% were of mother-calf pairs (Sivakumar and Nair, 2013) showing that the IMMA is an important reproductive area. Solitary individuals made up 60% of the observations. Dugong calves have been stranded in this region (www.marinemammals.in).

Indo-Pacific bottlenose dolphins were observed with calves and sub-adults in seven of the thirteen sightings between January and May 2018. The limited sampling effort restricts us from making remarks about reproductive seasons observed in the region but data collected suggests that the near-shore waters host resident populations of the species.

Indo-Pacific bottlenose dolphins have been observed foraging and feeding in near-shore waters.  The dolphins were seen feeding on Indian mackerel (Rastrelliger kanagurta) around reef habitats, and are also known to interact with shore seine nets that are used to catch bait fish species such as Sardinella sirm, Sardinella longiceps and Engraulis spp. suggesting that these near shore waters are important foraging grounds for the species. Dugongs are known to use the seagrass meadows in this IMMA and grazing trails were recorded in 11 seagrass meadows in this area (D’Souza et al. 2013; 2015). All feeding trails were recorded in meadows comprised of short-lived or early successional seagrasses like Halophila sp. and Halodule sp.

D’Souza, E. 2015. Seagrass ecosystems in the Andaman and Nicobar islands: with special emphasis on the Dugong dugon status and its distribution. Thesis submitted to Madurai Kamaraj University.

Anonymous, 2012. ‘National Conservation Strategy and Action plans for Dugongs and their habitats in India.’ Ministry of Environment, Forests and Climate Change, New Delhi.

Sivakumar, K. and Nair, A. 2013. Dugong Distribution, Habitat and Risks Due to Fisheries and Other Anthropogenic Activities in India. Wildlife Institute of India – Technical Report. 1-74

To make a request to download the GIS Layer (shapefile) for the Southern Andaman Islands IMMA please complete the following Contact Form: