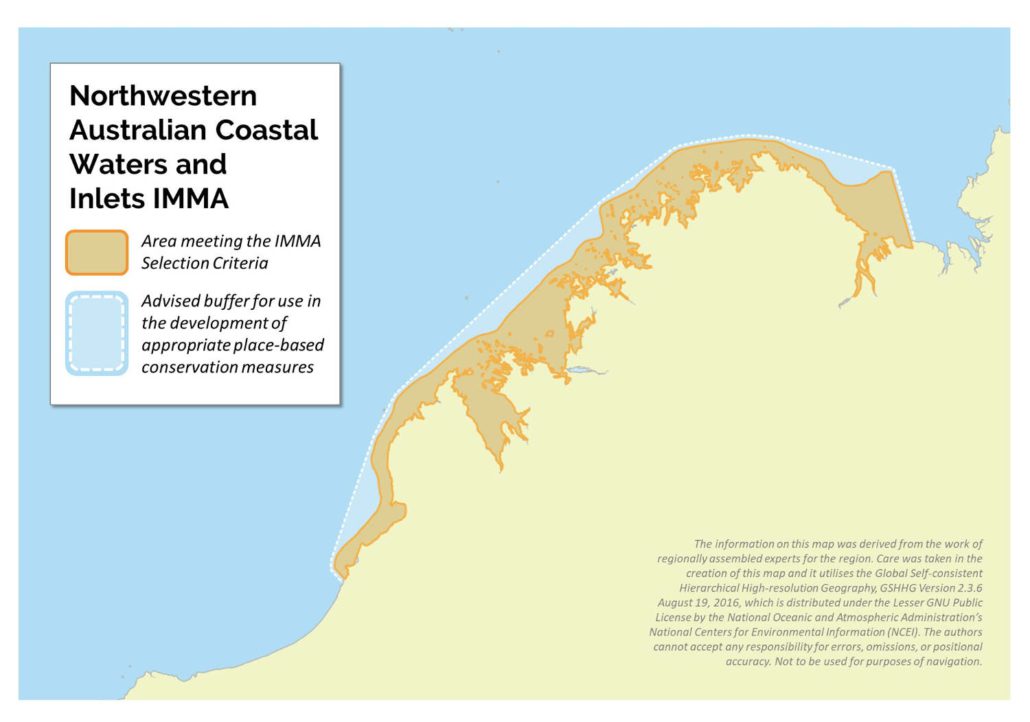 The boundary of this IMMA aligns with the network of Biologically Important Areas identified by the Australian Commonwealth for the dugong (Dugong dugon) and Australian snubfin dolphin (Sousa sahulensis) across the northwest of Australia and extends out to the 50m contour from Gourdon Bay in the south, encompassing the complex coastline and inland waters of the Kimberley coastline to the border with the Northern Territory in the north. The tropical Kimberley region of northern Western Australia is well known for its outstanding natural features, vast and remote landscapes and Indigenous cultural significance. The inshore marine environment has rugged and dynamic coastline, characterised by tidal movements of up to 10 metres, form extensive intertidal habitats adjacent to rocky shores and headlands, islands, sandy beaches and tidal rivers. This physically complex inshore environment supports a diverse range of habitats including seagrass, coral reefs, extensive intertidal mudflats and sponge-dominated filter-feeding communities with high levels of biological diversity. The importance of this region has been recognised through the creation of a network of State and Commonwealth marine protected areas that are jointly managed with traditional owners, stretching from Eighty Mile Beach Marine Park, Yawuru Nagulugan Roebuck Bay Marine Park, Lalang garram/Camden Sound and Horizontal Falls Marine Parks, and North Kimberley Marine Park. Eleven Aboriginal communities have saltwater country across this stretch of coastline, many with their own healthy country or indigenous protected area plans identifying cultural values, significance and ecological knowledge (e.g. Bardi Jawi Indigenous Protected Area Management Plan, Yawuru Cultural Plan, Dambimangari Healthy Country Plan, Wunambal Gaambera Healthy Country Plan, Balangarra Healthy Country Plan, Mayala Healthy Country Plan, Karajarri Healthy Country Plan).  Some of these identify spatial areas of importance to marine mammals while others note the cultural importance of species.

Three of the four primary species relevant to this IMMA, dugong, Australian humpback dolphin and Australian snubfin dolphin, are all listed as Vulnerable by IUCN. This criterion may be particularly relevant for dugong as there is an estimated population of over 12,000 dugongs inhabiting the Kimberley region (Bayliss and Hutton, 2017) which represents more than 1% of the global population.

Known resident populations of dolphins occur in Roebuck Bay (Brown et al., 2014a, 2016ab, Raudino et al., 2019a), Cygnet Bay, Cone Bay (Brown et al., 2016ab) and Prince Regent River (Raudino et al., 2019b).  The three coastal dolphin species occur in low densities with limited connectivity between communities more than 100 km apart (Brown et al., 2016a). Relatively small populations of these species were identified at specific sites across the Kimberley, typically consisting of fewer than 60 individuals. Roebuck Bay was identified as particularly important for snubfin dolphins, with the highest density of this species anywhere in its range.  Humpback dolphins were present in low numbers at all sites which may reflect their larger home ranges. Foraging behaviour of these three species has been observed across the region although the types of habitat that provide foraging resources vary. Foraging habitat within the IMMA includes rocky reefs, seagrass beds and mangroves, which all have associated fish assemblages that provide suitable prey for dolphins. Calves of Australian snubfin, Australian humpback and Indo-pacific bottlenose dolphins, and dugongs have been recorded across the IMMA. Given the residency of the three dolphin species at some sites and recorded presence of calves, these sites must be significant for these species at least. This would include Roebuck Bay (Brown et al., 2014b, Raudino et al., 2019a), Cygnet Bay (Brown et al., 2014a, 2016), Prince Regent River (Raudino et al., 2019b).

Snubfin dolphins have been observed engaged in a specialised foraging strategy that, so far, has only been seen in this species in Western Australia, despite extensive studies on this species in other parts of Australia (e.g. Northern Territory: Palmer et al., 2014; Queensland: Para et al., 2006).  The technique of spitting has been observed whereby an individual spits a stream of water at the surface, presumably to startle fish in front of the animal and scare them back towards the dolphin (the closely related Irrawaddy dolphin, Orcaella brevirostris, is the only other cetacean known to do this). Spitting behaviour has been documented in Roebuck Bay, Prince Regent River and Cygnet Bay (Raudino et al., 2019a, b). Several hybrids between a female Australian snubfin and a male Australian humpback dolphin have been observed in the Kimberley (Brown et al., 2014a).

Anonymous, 2012. ‘National Conservation Strategy and Action plans for Dugongs and their habitats in India.’ Ministry of Environment, Forests and Climate Change, New Delhi.

Sivakumar, K. and Nair, A. 2013. Dugong Distribution, Habitat and Risks Due to Fisheries and Other Anthropogenic Activities in India. Wildlife Institute of India – Technical Report. 1-74

Download the full account of the Northwestern Australian Coastal Waters and Inlets IMMA using the Fact Sheet button below:

To make a request to download the GIS Layer (shapefile) for the Northwestern Australian Coastal Waters and Inlets IMMA please complete the following Contact Form: