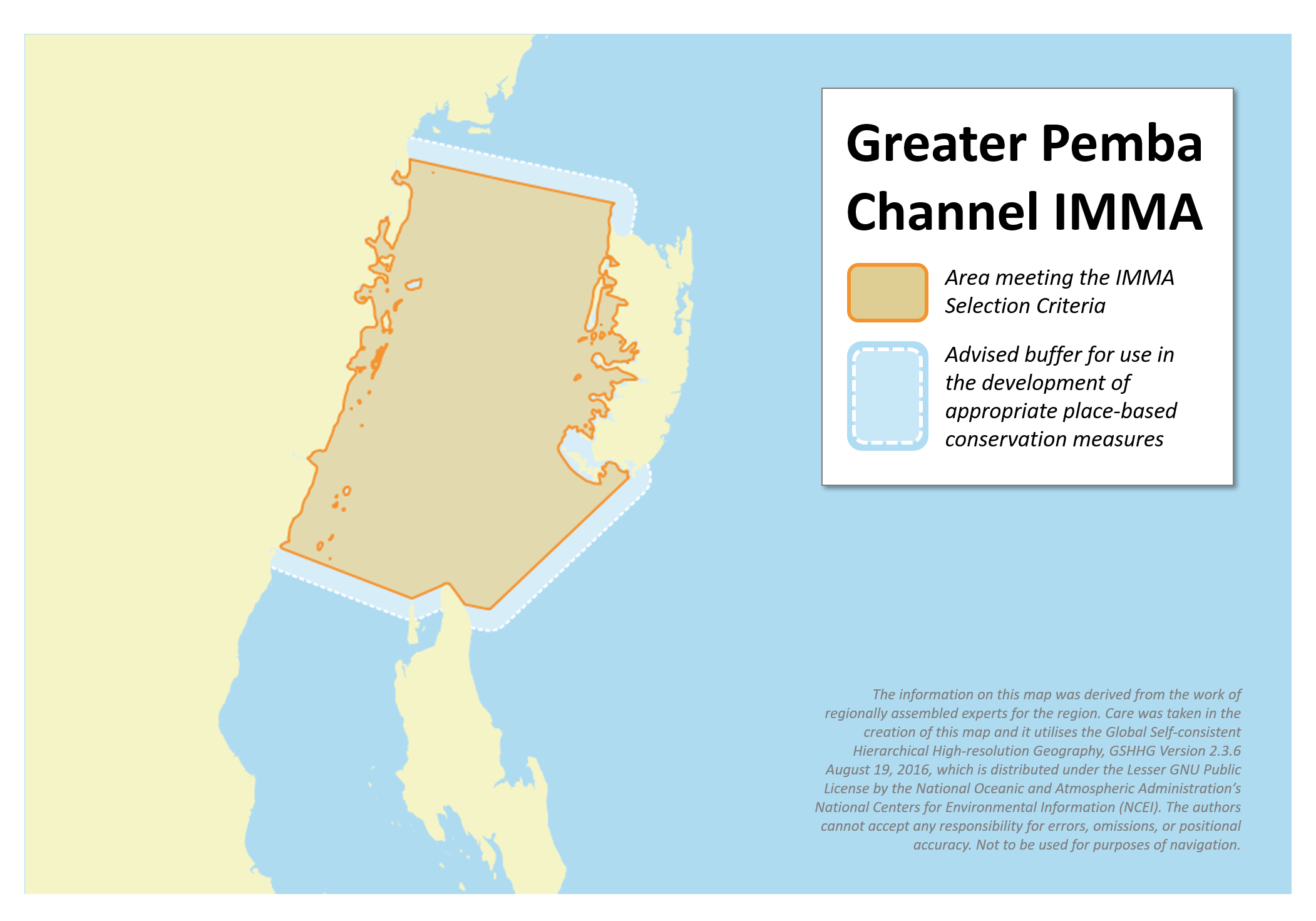 The Pemba Channel is located in northern Tanzania in the Western Indian Ocean. It is a 50 km wide, but 1000m deep channel that separates the island of Pemba from mainland Africa. The channel has steep bathymetry and a north flowing current that provides productive conditions for fisheries and cetaceans. A rapid assessment of cetaceans along the 800km coast of Tanzania showed that the Pemba Channel had by far the highest cetacean diversity and relative abundance in the country. Currently, 13 cetacean species are recorded in the Greater Pemba Channel IMMA. Endangered Indian Ocean humpback dolphins (Sousa plumbea) are found in shallow waters on both sides of the channel and the population around Pemba is small and assumed to be resident. The most commonly encountered cetacean within the area is the spinner dolphin (Stenella longirostris). Many deep-water species (e.g. Blainville’s beaked whales (Mesoplodon densirostris), dwarf sperm whales (Kogia sima), false killer whales (Pseudorca crassidens), and short-finned pilot whales (Globicephala macrorhynchus)) are also frequently sighted in the area.

The Greater Pemba Channel IMMA contains habitat that is important for supporting populations of Indian Ocean humpback dolphin (Sousa plumbea), which are listed as Endangered on the IUCN Red List.

Based on field surveys conducted west of Pemba island from 2014-2016 abundance of Indo-Pacific Bottlenose dolphins was estimated using photo-identification and closed population mark-recapture models, as 83 (CV 7.8%, 95% CI 72-97) individuals (Kasuga et al., in review). The discovery curve had plateaued suggesting that the majority of the population had been identified. A photo-identification catalogue of Indian Ocean humpback dolphins generated from the same surveys has created an even smaller photo-identification catalogue of 54 unique dorsal fins (including left and right side) and abundance of this endangered species is expected to be well under 100 individuals (Braulik unpublished).  Both species are present in the shallow waters inside the Pemba Channel Conservation Area along the west coast of Pemba Island and because they are shallow water species, and Pemba is surrounded by deep water, and the same photo-identified individuals were sighted in multiple years, it is likely that both of these populations are small, isolated and resident. Matching of photo-ID catalogues with those in neighbouring areas that is ongoing will support this conclusion.

To make a request to download the GIS Layer (shapefile) for the Greater Pemba Channel IMMA please complete the following Contact Form: