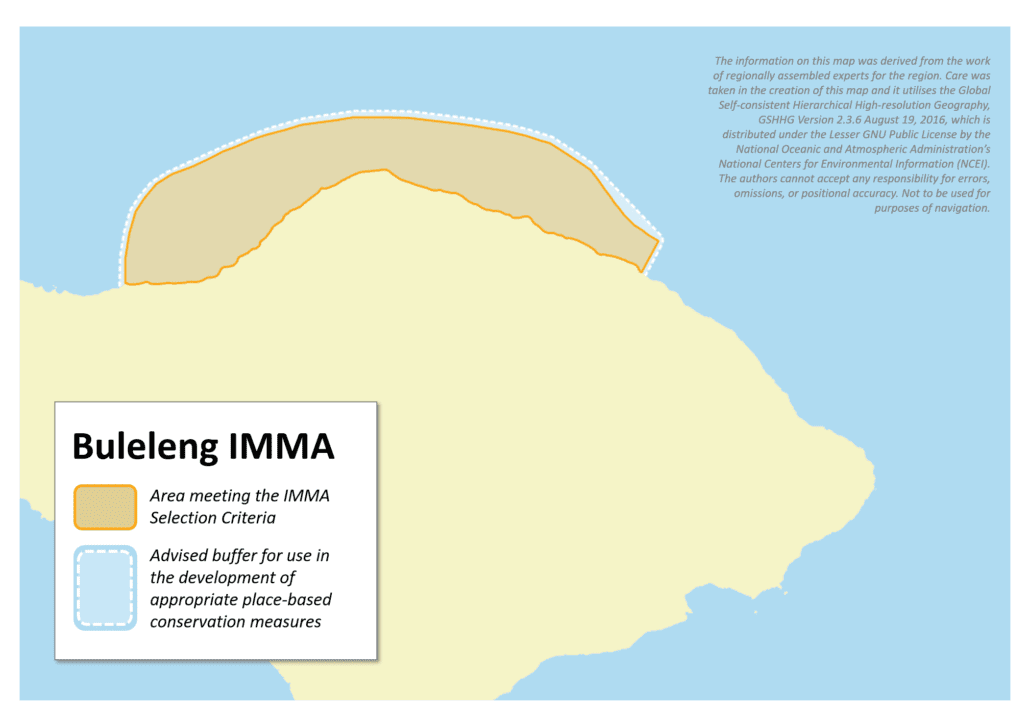 The Buleleng IMMA is located at the northern shores of Bali in Indonesia. The depth contour drops off to 200 m between 2-5 km from the shore and to 500 m between 5-8 km from the shore. These sloping submarine areas create an important environment for spinner dolphins (Stenella longirostris) and Fraser’s dolphins (Lagenodelphis hosei). In the Lovina (western) section dolphins are likely attracted by bathymetry features, while in the Tejakula (eastern) section dolphins are likely facilitated by both bathymetry and steep slopes. Both of these locally occurring populations are consistently observed feeding, and calves are regularly observed. The IMMA is also regularly inhabited by at least four more species, and a Lovina-based dolphin watching tourism industry may threaten these dolphin species. The Buleleng IMMA encompasses the Lovina MPA and the Tejakula MPA.

Spinner and Fraser’s dolphins have been regularly observed aggregating at the Lovina and Tejakula sections of the Buleleng IMMA (Mustika, 2011; Purba, 2018, pers.comm.). No abundance estimations have been produced but the observations were made systematically using line transects (Mustika, 2011; Purba, 2018, pers.comm.) or point samplings. The regular aggregations of these primary species have led to the development of dolphin watching industries in both sections (the late 1980s in Lovina and early 2000s in Tejakula).

Calves for both species have been regularly observed in both sections of the Buleleng IMMA, with occasional neonate dolphins also being observed. The calves in the Lovina section were regularly sighted since late 2007 until mid-2010 (Mustika, 2011), although no further surveys have been made ever since. The calves in the Tejakula section have also been sighted during Mustika’s two field visits in 2011 and 2012 (Purba 2018, pers.comm) and during Purba’s study in the area (Purba 2018, pers.comm).

To make a request to download the GIS Layer (shapefile) for the Buleleng IMMA please complete the following Contact Form: