Of KBAs, IMMAs and marine conservation strategies extending to the high seas

A webinar on marine key biodiversity areas (KBAs) held on 8 December 2020 gave an update on progress and prospects and some insights about the relationship of KBAs to IMMAs.

Key Biodiversity Areas (KBAs) are sites that contribute significantly to the global persistence of biodiversity in terrestrial, freshwater and marine ecosystems. The identification of KBAs is an important approach to address biodiversity conservation for individual sites. Approved by IUCN in 2016, the Key Biodiversity Areas Standard is intended for application in all biomes – marine as well as freshwater and terrestrial – to identify sites contributing significantly to the global persistence of biodiversity. To date, about 3,000 KBAs have been identified in the marine biome out of about 15,000 KBAs identified. Most have been for seabirds, with a few for coral reef ecosystems and sea turtles. The marine mammals have presented much greater challenges and filling that void has been the role of important marine mammal areas, or IMMAs.

IUCN Marine Mammal Protected Areas Task Force co-chair Giuseppe Notarbartolo di Sciara reported that 159 IMMAs for species ranging from dugong to blue whales have been identified, mainly in the Southern Hemisphere, and work is ongoing to finish the global picture over the next 5 years.

Andy Plumptre, head of the KBA secretariat, said that the KBA approach was to provide one harmonised approach to identifying sites of global importance.

Notarbartolo di Sciara responded that while he hoped that IMMAs could one day be merged into KBAs, the day is distant due to lack of data for marine mammals. The criteria for IMMAs and KBAs is consistent except for the KBA thresholds which present difficulties as most marine mammal species range over huge areas in low densities, and global marine mammal population numbers are largely unknown. Also, IMMAs recognise the global relevance of conserving regional populations which might not be considered by KBAs.

Both IMMAs and KBAs aim to help identify marine habitats in areas beyond national jurisdiction (ABNJ) which forms most of the ocean. At present, however, there are very few high seas IMMAs or KBAs. A massive effort needs to be undertaken to fund data collection on the high seas.

Charlotte Boyd, chair of the IUCN KBA Standards and Appeals Committee explained that KBA sites tend to be smaller than IMMAs because they aim to be potentially manageable as a unit. In terms of the thresholds with population size needed for identification as a KBA site, she indicated that there could be other assessment parameters depending on the types of data available for that species if it’s reliable as an approximation of distribution. 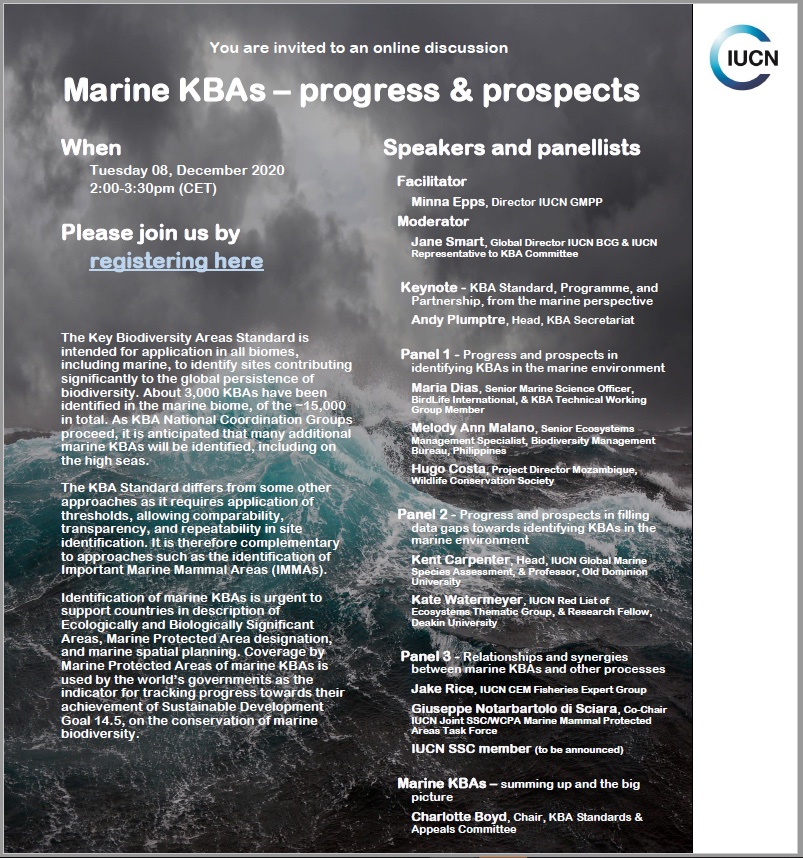