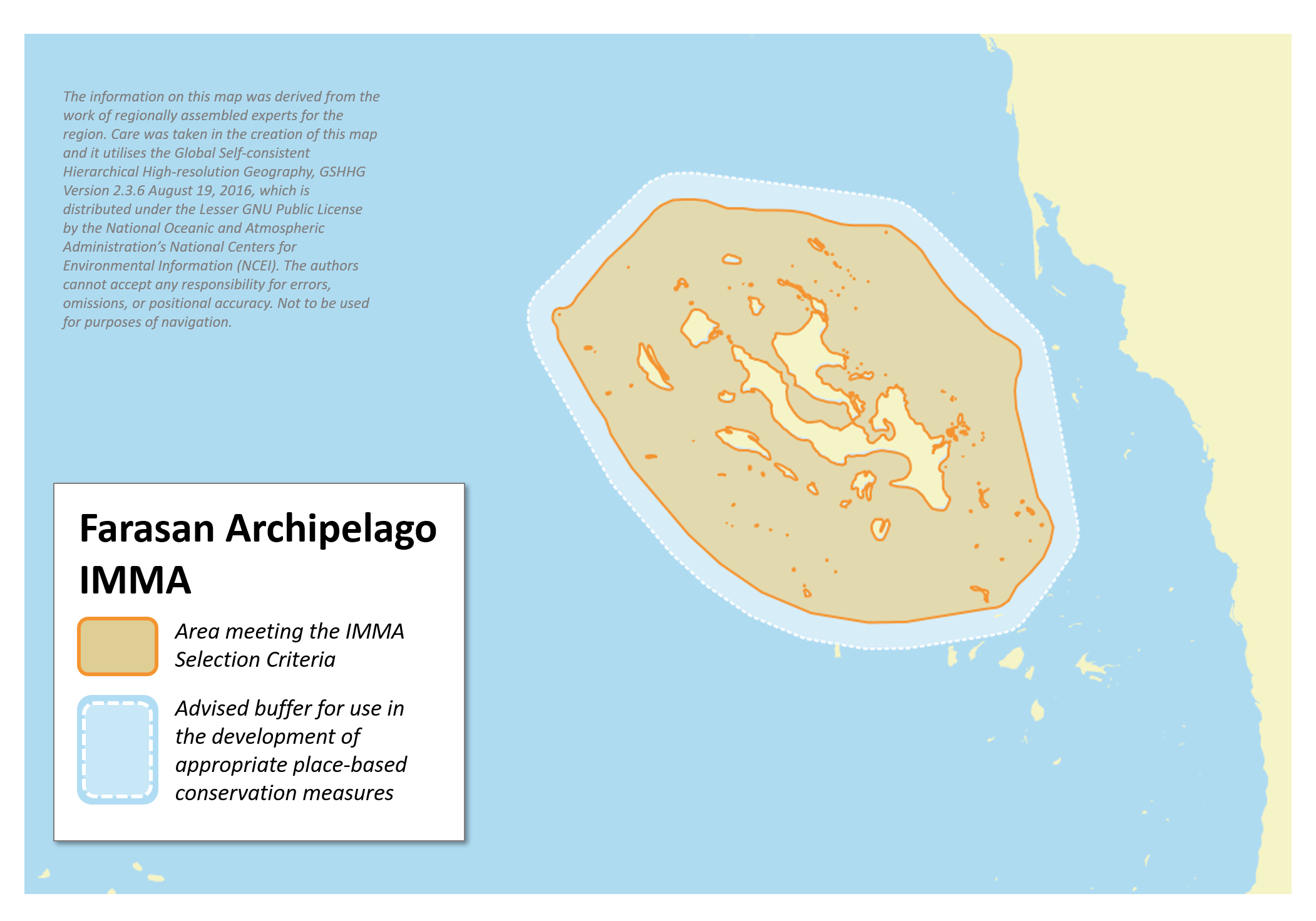 The Farasan Islands are a large archipelago comprising over 170 islands and islets of uplifted coral reef.  The IMMA lies between 40 and 90 km offshore from the city of Jazan on the southeastern Red Sea coast of the Kingdom of Saudi Arabia. A Marine Protected Area covering  5,408 km2 was established around the town of Farasan. This MPA has also been nominated by Saudi Arabia as a tentative UNESCO World Heritage site. The waters of the Farasan Islands support a host of marine mammal species including Endangered Indian Ocean humpback dolphins (Sousa plumbea) and Vulnerable dugongs (Dugong dugon), which feed on the area’s extensive seagrass beds.  Bryde’s whales (Balaenoptera edeni), spinner dolphins (Stenella longirostris),  and Indo-Pacific bottlenose dolphins (Tursiops aduncus) are also documented in the area.

Two species within the area listed as threatened in IUCN’s Red List: the Indian Ocean humpback dolphin (EN) (Gladstone & Fisher 2000, Masseti 2010), and the dugong (VU) (Preen 1989, Masseti 2010) consistently occur in the area. Please note that: a) Indian Ocean humpback dolphins where listed in both papers as Sousa chinensis, opposed to Sousa plumbea, because they were published before the species was split; b) bottlenose dolphins are listed as Tursiops truncatus, but the locations where the sightings were made (many of which in very shallow waters) strongly suggests that these must have been Tursiops aduncus, a species the presence of which in the Red Sea seems not to have been known by the authors.

The area is noted as providing aggregation opportunities in shallow waters for spinner dolphins, a species known to spend daylight hours within reef shelters to rest after a night spent foraging over open sea slope/deep areas. Given the proximity of steep slopes (about 10 n.m.) to the Farasan Islands, likely to provide appropriate feeding grounds for the dolphins, it can be assumed that the Farasan Islands provide daytime resting aggregation opportunities for spinner dolphins.

Bryde’s whales (Balaenoptera edeni) and Indian Ocean humpback dolphins were observed feeding in the area (Gladstone & Fisher 2000) and dugongs were reported to occur on the extensive seagrass beds in Khawr Ma’di between Farasan Kebir and Segid (Masseti 2010).

Preen, A. (1989). The status and conservation of dugongs in the Arabian Region. MEPA Coastal and Marine Management Series Report, 10, 200 p.

To make a request to download the GIS Layer (shapefile) for the Farasan Archipelago IMMA please complete the following Contact Form: