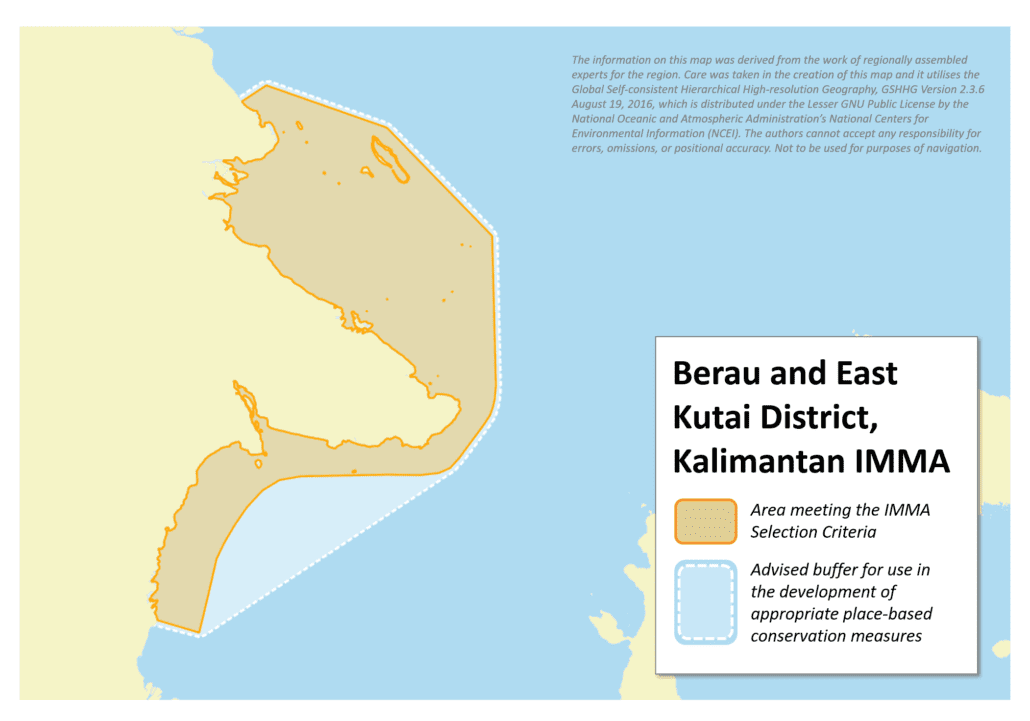 The area has a high importance for at least 25 identified cetacean species (70% of all cetacean species present in Indonesia) and one Sirenian species. The area covers two districts, i.e. Berau and East Kutai of which the first is a Protected Marine Park. The areas encompass both estuaries and bay areas that provide habitat to two species including the Irrawaddy dolphin (Orcaella brevirostris) and the Indo-Pacific humpback dolphin (Sousa chinensis). Irrawaddy dolphins are known to have a year-round presence in the IMMA. Surveys conducted between 2003, 2007-2008 and 2013-2017 showed that most species are sighted near islands and reefs. Sperm whales (Physeter macrocephalus) have been observed feeding at different locations throughout the IMMA range during all survey periods (March-August, October, except for December).  Omura’s (Balaenoptera omurai) and fin whales (Balaenoptera physalus) were observed feeding in nearshore narrow shelf habitat with steep slope in months  March-June, the former species over different years.

Irrawaddy dolphin populations that locally occur in the region are small and occupy small areas in relation to the species’ global population. They occupy specific niche habitats within the IMMA such as estuaries and bays where they are observed throughout the years of study. They have never been observed in coastal habitat outside of these estuarine or bay habitats and therefore it is suspected that these form discrete populations. The two areas where they have been observed in the IMMA is in the Berau Delta and Sangkulirang Bay. These locations are separated by the Tanjung Mangkalihat Peninsula, which has a very narrow shelf with a steep bathymetric drop off to 1km, and Irrawaddy dolphins here but also in other parts of Kalimantan and Indonesia have never been observed in waters deeper than 100m.

Criterion C1 applies as the locally occurring Irrawaddy population only occupies the bays and estuaries within the IMMA, where they occur year-round with young calves having been observed within groups (as well as mating behaviour) (Kreb, 2008). Calves of Indo-Pacific humpback dolphins, Sousa chinensis, have been observed in the month of April with total best-estimated group sizes between 11 to 15 individuals (Kreb, 2008).

Sperm whales have been recorded to undertake repeated long-dives and respiration behaviour has been observed for sperm whales during 5 out of 8 sightings at more or less similar locations. These observations indicate the likely feeding activities.  A maximum of 6 sperm whales have been observed, with observations in the months of May, June, August, and October. Sousa chinensis was also observed in April 2008 to be mud feeding in the Berau estuary, and were observed several times to perform head stands with their tailstock vertical out of the water while shaking their body.

Kreb, D. and Budiono, I. 2004. ‘Biodiversity assessment of cetaceans and mantas near the Berau Islands, East Kalimantan, Indonesia’. Provisional Final Report for the Indonesian Institute of Sciences (LIPI).

Kreb, D. and Budiono, I. 2005. ‘Cetacean Diversity and Habitat Preferences in Tropical Waters of East Kalimantan, Indonesia’. The Raffles Bulletin of Zoology 53 (1), 149-155.

Download the full account of the Berau and East Kutai District, Kalimantan IMMA using the Fact Sheet button below:

To make a request to download the GIS Layer (shapefile) for the Berau and East Kutai District, Kalimantan IMMA please complete the following Contact Form: